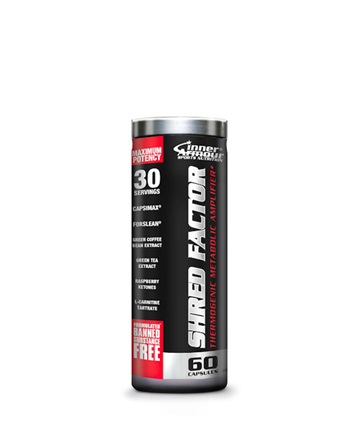 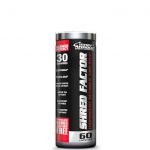 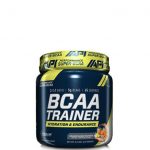 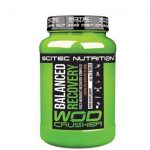 This synergistic formula provides Green Tea and Caffeine, which together increase the release of the most effective fat burning hormone norephinephrine, while also increasing 24-hour energy expenditure, to have you burning calories while even at rest.*

Shred Factor also delivers, Green Coffee Bean Extract which has been suggested to help reduce the accumulation of fat, Raspberry Ketone to activate hormone sensitive lipase, the key fat burning enzyme that is used to breakdown fat, and L-Carnitine Tartrate, which releases stored fat, where it can be burned off as energy during workouts.* Lastly, this thermogenic amplifier also helps reduce hunger by providing Cayenne Pepper and Theobromine.*

Shred Factor is formulated without the use of proprietary blends, you get only what you see on the label – nothing but clinical strength ingredients at maximum doses that activate all aspects of fat-burning, drive up metabolic rate, and help preserve lean muscle tissue for a ripped and shredded lean hard body!*

ForsLean
A clinically proven fat burningingredient, ForsLean derived from Coleus forskohlii, has a direct effect onAdenylate Cyclase the enzyme that activates cyclic AMP or cAMP, supporting the breakdown of stored fat, increased utilization of fat as fuel, and an increase in thermogenesis and metabolic rate. It has also been suggested to have an effect on hunger, reducing calorie in-take and helping maintain lean body mass while dieting.*

Green Coffee Bean Extract
Contains the active ingredient chlorogenic acid, which has been shown to promote weight loss by reducing the absorption of glucose, but also inhibiting the accumulation of fat in the body through fat metabolism in the liver.*

Caffeine
Caffeine’s is a multi-faceted fat burning ingredient that works to crank up energy, increase metabolic rate, suppress fat absorption, increase mobilization of fat and enhance the fat burning process. It has a synergistic effect with Green Tea and Green Coffee, increasing their effectiveness by blocking the degradation of the enzyme that breaks down cAMP, allowing for prolonged fat burning activity.*

Green Tea Extract
Contains the active component EGCG (epigallocatechin gallate), which increases thermogenesis or energy expenditure. EGCG supports the amount of fat used as energy during exercise and post-workout by inhibiting the re-uptake of the fat burning hormone norepinephrine, which is a key compound involved in metabolic regulation and appetite control.*

Theobromine
Provides a source of methylxanthines that act similar to caffeine in the body, delivering long-lasting feel goodenergy! Theobromine can also reduce appetite.*